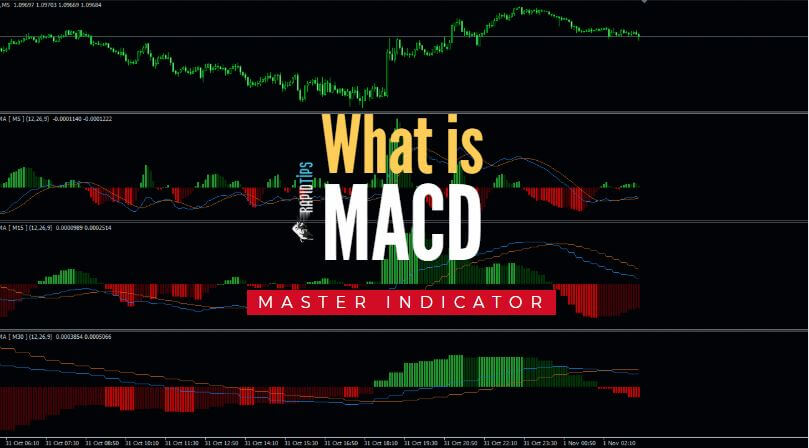 What is MACD in Technical Analysis?: Moving Average Convergence Divergence (MACD) is a very popular trend following indicator and used in technical analysis. Its also called as Mac-Dee. It is developed by Gerald Appel in the late seventies. MACD is one type of oscillator indicator which is used by traders and analyst to gauge the momentum of stocks.

Why MACD is so informative and popular? Because it is a combination of two different types of indicators. First one is, MACD consists of two moving averages of varying lengths (Moving Averages are lagging Indicator) which helps to identify the trend, direction, and duration. The second part of MACD is the histogram which oscillates above and below a center zero Line which indicates security’s momentum. In this article we will learn about what is MACD and How does it work?

The MACD indicator is consist of three elements which are MACD line, Signal line, and the MACD histogram.

The exponential moving average is measured according to the closing price of a stock and the periods used to calculate the two EMAs are usually set as 12 periods (Faster) and 26 periods (Slower).

With different time frame (minutes, hours, days, weeks, months) the periods may be configured, but in this blog, we will discuss daily setting only. These parameters can be changed as per the different trading strategies.

“Invest in yourself. Your career is the engine of your wealth.” – Paul Clitheroe

The signal line is calculated from a 9-day EMA of the main line and as such provider further insights about its previous movements.

When the MACD line and Signal line crossover, it indicates trend reversal signals.

The histogram is a visual record of the relative movements of the MACD line and the signal. It is simply calculated by the given formula:

The default setting for MACD is based on (12,26,9) period EMAs. However, traders and technical analyst change default parameters as per their strategies for a different time frame. For example, with a longer time frame such as weekly or monthly charts – MACD (5,35,5) is one of the settings used by long term traders.

“The stock market is filled with individuals who know the price of everything, but the value of nothing.” – Phillip Fisher “

Centreline crossover occurs when the MACD line moves either on the positive or negative area.

When it crosses above the centreline, the positive MACD value indicates that,

A negative MACD is shown when the MACD line cross below the centreline which indicates that,

“Know what you own, and know why you own it.” – Peter Lynch

The MACD line Oscillates above and below the center line (zero lines), and the direction is depending on depends on the direction of the moving average cross.

The bearish divergence forms when a stock forms higher high and the MACD forms a lower high.

The MACD indicator is one of the special indicators because it together includes momentum and trend. This unique mix of momentum and trend can be applied to a minute, daily, weekly or monthly charts with different parameters. The default parameter is MACD (12,26,9). The MACD is not suitable for identifying the overbought and oversold level of security.